We introduce you the Opilon – our new album released in February 2013. Surprisingly we play there didgeridoo and baryton sax again, but this time the exploration goes much futher. With great contribution of our guests we reach remote lands, musical spaces in which we sinked to, coming up with new stories of rezonantions, movements and enjoyment.

As usually we went through many genres as disco, down-tempo, psy-trance up to etiopian village procession. New album is reflecting all our musical perceptions, mucical voyages and meetings we had last year and therefore violoncellist Natálie and ukrainian vocalist Marichka is there too. They both with Jiří (producer, percussionist) enable us to drag our visions up to unexpected level of music – which we are proud to present you in – Opilon.

1. 4. 2013 about Opilon
Sticking booklet I am still wonder to name of this album, why it is like that. From where the lingvistic shape came from? As a first here were the animals monkey and elephant, which shout at me from my thinking zoo in my head, than Roman said me, let’s unite them, and named so the album. The year we composed the songs to new album we listen several great music projects, their influence is listenable in our album of course. We though much about the sound, built up own rules, than destroyed them. We decided to give to our sound another space. Than we met violoncellist Natalie, her instrument is like sound-magic-box , and vocalist Marichka from Ukraine. So we invited both to make a new album with us, and that is how the Opilon was born. E.Ž. [less] 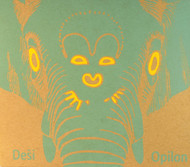